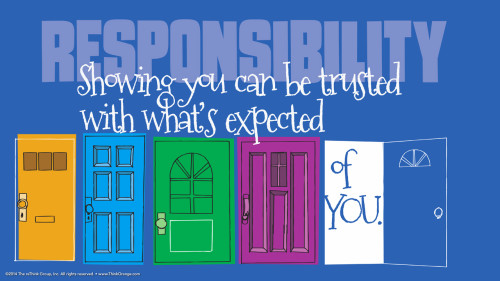 Life App: Responsibility—Showing you can be trusted with what’s expected of you.
Theme: Opportunity Knocks
Date: September, 2014

Our finished set for Responsibility is working well with our large group scripts for this month, but two weeks ago I wasn’t sure if that was going to be the case! You can read about our preliminary process and original plan here. We didn’t deviate too much from the original plan, but getting there was quite an adventure.

I usually have a good number of volunteers to help me create the set each month. This month however, it was tough to get people together. Back-to-school schedules and last minute vacations had our volunteers committed elsewhere. While I had helpers to paint the doors and plywood boards, I really needed the help putting the set together. This was the part that required more craftsmanship … not my forte! I couldn’t seem to find anyone that was available to help at the same time I was able to work. Usually when that happens, I rope my husband into helping me… but he was out of town that week. So, it was up to me to somehow attach four doors to four pieces of plywood in such a way that they would all hang evenly, open properly and look attractive. To some, that may not sound like a big deal, but for me… it was one problem after another.

All this to say – this set did not go as planned. But, I learned a lot and was reminded not to give up. I have become an expert at tweaking and am learning that Plan B is not always a bad thing! As my girl’s art teacher in elementary school taught them – “Mess it up, dress it up!” That became my favorite phrase over the last few weeks.

I hope sharing my mishaps encourages you all in some way. I know that may sound a bit funny but personally, I appreciate and learn just as much (maybe more) from people who share their challenges/mistakes, as from those who share their success stories. I hope my crazy experiences inspire you in some way to keep going and to figure out how to recover!

For now, here is a gallery of our finished product for September’s set.

Be sure to check back soon for this month’s SHOWCASE of amazing environments created by churches around the country.