If you read this blog at all, you know my love of environments and my desire to create irresistible environments for kids. Almost equal to my love of creating environments is my love of production. I believe the two go hand in hand and some of the best productions create environments that connect the teaching to what is seen, heard, felt and experienced. Great productions and great environments can work together to connect the dots for those in attendance. I have always felt that Orange does this beautifully and last night’s main session did not disappoint. Each element of the production pointed us to think about this one big idea: Monday’s Coming – Reimagine What You Do!

The production opened with a sketch where a character named “Monday” takes the stage and is feeling useless. She shares her issues with how she is unloved and no one really likes her and she just wants them to give her a chance. A character named “Sunday” makes a grand entrance and is smug and superior. Each day of the week follows, carrying their own amazing characteristics: Friday is a party guy, Saturday is dressed to be outside for yard work, etc. Thursday arrives with a tablet around her neck and is all about TV shows – Must See TV! Wednesday is the Hunchback of Notre Dame (hump day) and is “devoted” to Sunday, and Tuesday finally shows up and offers everyone tacos! The struggle between Sunday and Monday escalates as Sunday continues to think he is the best day of the week while Monday feels a bit bullied. The sketch ends with Sunday singing a parody of the song “I Will Survive” and the production transitions to the band singing the song “Everybody’s Working for the Weekend.” If you don’t know the song, Google the lyrics to see the brilliant connection to the session’s theme.

From there, Jon Acuff took the stage and shared a few things about Sundays in general. Did you know that researchers have determined that Sunday at noon is the most depressing hour of the week because people begin to feel Monday coming? He makes the point that people visit our churches on Sunday but they live in Monday. He’s written a whole book about this called Rescue Monday. Jon Acuff transitioned us to four leaders who each took the stage individually and shared brief personal stories of their Mondays and how important it is for us to step into Mondays for the people we serve. 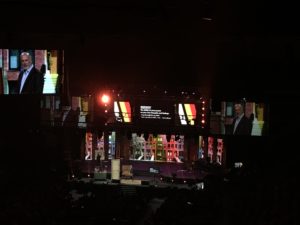 Every bit of the production described above pointed us to the main idea of the message Reggie Joiner was about to deliver. It gave us visuals, humor, statements, and tangible ways to remember the main points of what Reggie was about to share. And when he took the stage his message was powerful, challenging, and inspiring. True to Orange Form – Reggie’s props, visuals, and stories served as beautiful illustrations and were memorable moments that made the concepts stick.

I could try to recap Reggie’s message, but I doubt I’d do it justice. Instead, I’ll share just a few things that stood out to me. 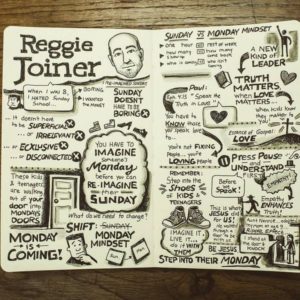 For more details, check out this amazing illustration, created by an artist who sketches the message live throughout the session.

My favorite element of the message was a trunk Reggie used at the beginning of his talk. He pulled shoes from this trunk: children’s shoes, teenager’s high heels, adult sized sneakers. Each pair represented a child or person we might meet. Later in the message – as Reggie puts the shoes back into the trunk he made this statement – we can’t speak the truth in love to people unless we’ve walked in their shoes. There will be kids and families that will never step into our church unless we step into their world. The power of this was immense for me. When the shoes came out of the trunk at first, I thought they were just representations of people. But at the end, when the challenge to walk in other’s shoes was extended, it tied the entire night together with one big exclamation point!

As I sat and listened to this amazing content and thought through each aspect of the production, I was convicted. I’ve been wrestling with something the past few months. I love my work and feel so privileged to be in ministry. I love the local church and believe in what we are doing.

But, the nature of my role and specifically what I’m passionate about, can keep me so busy inside the walls of our church that I forget to get out on the front lines and show up in the Monday-Saturday of people’s lives. It’s easy to hide behind creating sets, producing large group, and organizing teams, all the while thinking I’m serving others and being the hands and feet of Jesus. Even my role as a storyteller makes it easy for me. I get to teach the Word of God to elementary-aged kids, but I am not really involved in their lives. I often don’t know many of their names. The tasks of my job can easily keep me in my “safe place,” with people who think like I do, believe what I believe, and love Jesus just like me. I sometimes wonder if this is what God had in mind for me when He called me into ministry? Of course, I think it’s important but it can’t be the only thing. And it can’t trump loving people and being involved in their lives.

So, I left Session 1 with a burning question in my heart… Who’s Monday do I need to step into? Who in my life, my neighborhood, my world, needs me to step in and be the hands and feet of Jesus? I challenge you to ask the same thing. Let’s reimagine what we do on Sunday’s in light of what the people we serve are facing on Mondays… and every day.